We previously discussed who Design Fugitives is, as a company, so our current series of blog posts are going to give some insight into who we are individually. Our diverse personalities are what make dF such a unique and creative company. Enjoy “The Fugitives of Design Fugitives.”

That’s how Design Fugitives partner Paul would describe himself. I would add “goofy” to the list, but we limited him to only 3 words. Born in Belvidere, IL and raised in Waukesha in a family of seven kids, it’s apparent that he developed his sense of humor to keep from becoming the “forgotten middle child.” Paul said he knew from an early age that he had an interest in design and fabrication but didn’t really consider it as a viable career option until much later in life. He studied Liberal Arts with an emphasis in Pastoral Studies at Martin Luther College and went on to study for a Master’s Degree from Wisconsin Lutheran Seminary before changing direction and pursuing his childhood interest of design at UW-Milwaukee’s School of Architecture and Urban Planning. 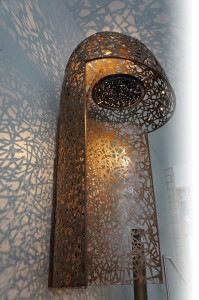 Paul came to Design Fugitives in February of 2010, after meeting our other two partners in grad school at UWM. They bonded over their desire to be more active in the fabrication process and, with other like-minded former Fugitives, created Design Fugitives. “You’re really more of an artist than an architect,” observed a complementary friend of Paul’s after viewing one of his drawings (or was it a critique? Paul isn’t quite sure), so being a designer and fabricator of architectural-scale art seems to be the perfect fit for Paul.

So far, his favorite project that he’s worked on has been the Cosmic Ecclesiastical Baldacchino created for St. Mary Magdalen parish in Grand Rapids, MI because “it was a great combination of cutting edge design and fabrication work guided by deeply held beliefs and convictions, both mine and the client’s.” [photo] He’s clearly not alone in picking this piece as his favorite, as it has won multiple design awards and was most recently featured in CodaWorx’s January issue of CODA Magazine: “Light as Art.”

When Paul isn’t carving wood (his favorite medium to work with – “It brings me back to projects I did as a kid.”) or singing in 4-part harmony (his secret talent!), he’s usually chasing around his two creatively energetic kids, June (3) and Louis (17 months), which is a full time job in itself. In the rare moments of calm and quiet, Paul says he could be found reading for hours, possibly at his favorite coffee shop: Anodyne Roasting Facility in Walker’s Point, or catching a movie at the Oriental Theatre on Milwaukee’s East Side.

He also participates in the “Light the Night Walk” for the Leukemia and Lymphoma Society, has sponsored a child in Zimbabwe through Compassion International, regularly donates blood and contributes to Community Meals through the Garden Homes Lutheran Church. Volunteering his time to help these non-profit organizations inspires him, because it reminds him that he’s a small part of something larger.

Between his unwavering commitment to Design Fugitives, his family, and his volunteer work, I think it’s safe to say that Paul is following his own advice: “Whatever you do, don’t do nothing.”

Make sure you check back next month to learn about the rest of this team of Fugitives!