We previously discussed who Design Fugitives is, as a company, so our current series of blog posts are going to give some insight into who we are individually. Our diverse personalities are what make dF such a unique and creative company. Enjoy “The Fugitives of Design Fugitives.”

Miguel originally planned to study Drawing and Painting while attending the Milwaukee Institute of Art and Design (MIAD), but after taking an introductory sculpture class his sophomore year and realizing that objects and physical spaces were much more interesting to him than working within a flat plane, he decided to change his course of study to Sculpture and Industrial Design. We’re pretty happy he had this realization, as that passion and knowledge has lead him to become the lead fabricator at Design Fugitives. Being able to understand how things are made and what steps you need to take to achieve a certain result intrigues his curiosity regarding the fabricated environment we live in. 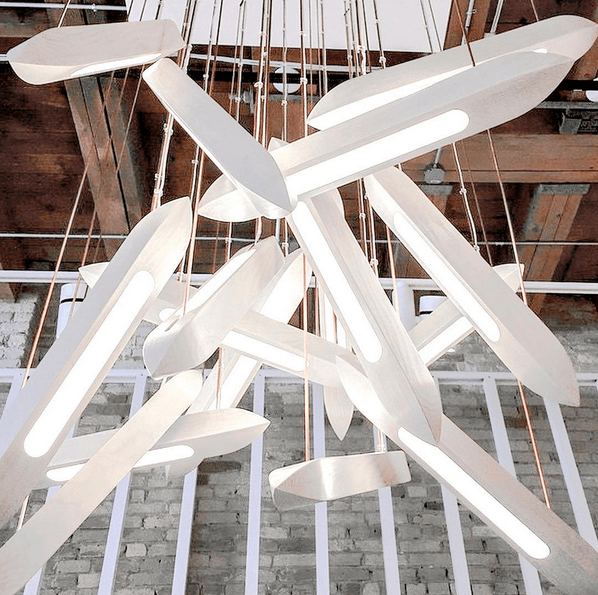 As he spends most of his time in our shop, Miguel has his hands on a lot of different materials. His favorite? “I think i would have to choose Aluminum as my favorite medium/material. It’s light, strong, nearly rust proof, and looks great raw. It is an incredibly malleable material and quite forgiving. I definitely understand why Apple keeps choosing it as their medium of choice.” He also enjoys working with lighting and creating suspended sculpture pieces, especially the lighting piece “Shuttles” that we created for Kit and Ace and the mobile “Orchid Bloom” for the Sojourner Family Peace Center.

Originally from Chicago, Miguel moved to Mexico when he was three and lived there for five years before returning to Chicago. He moved up to Milwaukee for college and has stayed here since, citing the numerous opportunities available to a young artist paired with the affordability of the city as his main reasons for staying. Although some people might argue that Chicago, New York, or LA are the “places to be” if you’re an artist, Miguel says he wouldn’t be able to afford

both his apartment and his own studio if he lived in those cities and prefers the makeshift and independently run aspect of the Milwaukee art scene. The ability to rent his own studio space is especially important to Miguel, as he spends most of his free time at his studio, either working on ideas and sculptures for upcoming shows or just cultivating his creativity by playing conceptually.

This motivation and work ethic hasn’t been overlooked by his peers, former professors, and employers either, as he’s been told by many that he is hardworking with a healthy amount of perseverance. He’s always been motivated by the knowledge that we only have a limited amount of time on this earth, so he pushes himself to create the best work he can while he’s here. This same inspiration is what drives him toward volunteering activities in Milwaukee. Earlier this summer he participated in the Crohn’s and Colitis Walk with his girlfriend, Marissa, who has Crohn’s and has started working with a non-profit to bring more awareness toward the disease.

Miguel isn’t all work though. He describes himself as sarcastic (and we’re not arguing!) and spends his time playing on a soccer league with his friends or Snapchatting videos of his cat, Scoob. It’s that balance between motivation, creativity, and humor that make him a great fit with the Design Fugitives team.

Make sure you check back next month to learn about the rest of this team of Fugitives!